No joke. This really happened. On a flight over the holidays, I sat next to a woman with panic disorder and a flight phobia who just realized she had forgotten her anxiety medication. Worse still, she had her six-year-old daughter with her. Her first panic attack sent her crawling over me to squat in the aisle, crying and heaving, sweating profusely and looking like she may vomit. She was trying to escape, only to realize there was nowhere to go, especially since she couldn’t very well run away from her young child or off the plane, for that matter. Imagine her surprise when I identified myself as an exposure therapist with specialized training to treat panic! It was a day-after-Christmas-anxiety-miracle!

Our ride on the plane that day turned into a bit of a family conversation, as the woman’s daughter needed as much explanation about what was going on as the mother needed psycho-education about panic! –Mom’s body feels very, very uncomfortable right now, that’s why she’s crying. But she isn’t in danger, she just feels uncomfortable.— The mom had never had treatment for anxiety other than being prescribed a benzodiazepine and had no understanding of the panic cycle or the mechanics of panic. She’d never learned the role of her thoughts in an anxiety attack. The one thing she was doing during her panic was saying repeatedly, “I’ve got to relax, I’ve got to relax.” Felt a little like a child crying in pain while saying, “I’ve got to laugh, I’ve got to laugh”. We talked about all of those things though, and she ate it up!

It struck me that so many people out there have such serious, life-impacting problems with anxiety and yet they have never tried getting therapy and never even learned that much about their problem. Some, like this woman, have no idea that there is anything to be done other than take a pill.

In another blast of irony, I ran into a colleague on my layover after this very flight (we were heading to the same convention). He offered me a free drink voucher that he couldn’t use due to taking anti-anxiety medication. This is a man who travels 100 days per year to destinations that require air travel takes anxiety medication for every flight. I started to wonder just how many people were medicated for anxiety in that airport!

You would misunderstand me if you heard from this that I am anti-medication for anxiety. I’m not. Many of my clients have determined that even with treatment, they need it. But it’s a shame that there are folks with anxiety disorders out there who don’t even have basic tools to care for themselves in the midst of elevated anxiety symptoms.

I may never know how the story unfolds for that mom and her little girl, but I did feel the grace of the chance to offer an act of kindness to this woman and her little girl. And, at the end of our flight, the woman gave me a giant hug. Perhaps her response to the anxiety Christmas miracle will be to learn a little more about her debilitating anxiety and maybe, just maybe, get treatment. 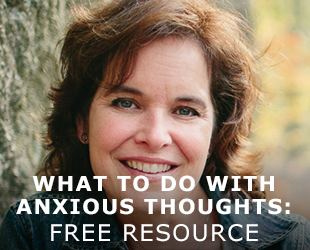